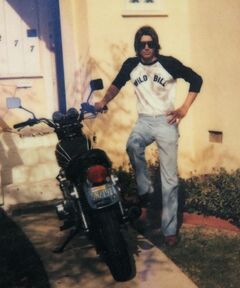 The story of Wild Bill and why Wild Bill’s Miracle Balm was created:
In 2016, Wild Bill (aptly named after his crazy years of professionally racing motorcycles in the 1970’s) was diagnosed with Stage 4 cancer. He was given 4-6 weeks to live. Bill tried chemo one time and it almost killed him with a seizure. His whole life, Bill was an avid believer in the healing powers of cannabis and was an avid smoker, so he decided to make cannabis his cure. We started making THC distillate in our backyard and Bill started taking 1 gram a day...he did that for 2 years and was able to live a mostly good, meaningful life. In the meantime, his wife Debbie (Me) wanted to relieve his external pain. I took the THC distillate we were making and formulated Wild Bill’s. By rubbing it into wherever he hurt, his pain would disappear! Inspired by Bill’s relief, I started giving our Miracle Balm away to pain- stricken friends and family. They raved about its effectiveness so much that my son and I were inspired to make my balm available to the public in 2018.
Thank you,
Debbie & Tyler Barlow